This post originally appeared on Panels, which is now Book Riot Comics

Everyone has their own rituals when it comes to reading comics. Some people like to read them on the train, others while drinking a cup of coffee. Me? I’m as big of a sucker for music as I am comics, luckily you can enjoy both at the same time! At Graphic Playlist we have a recommended playlist for some of the comics we’ve recently enjoyed. 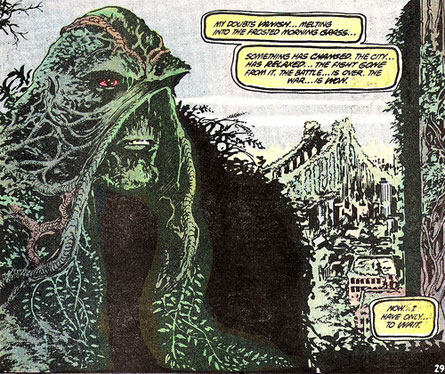 What’s there to say about Alan Moore’s Swamp Thing that hasn’t been already said? This run is a classic, a must-read for anyone who enjoys the comic book medium. It’s a super hero comic, yes.  It’s a horror comic, yes. But it’s so much more than that too. If you’re at all familiar with Alan Moore, you know he has a whole lot to say, he’s the quintessential literary comics writer. Moore used Swamp Thing, a DC comics book, as a soapbox to discuss morality and ethics. He did it in a way that was more thought provoking rather than preachy, and the fact that he managed to pull this off in a mainstream “superhero” comic in the 1980’s is a pretty impressive feat in and of itself. Swamp Thing is mostly separate from the DC universe at the time, so it’s easy to just pick up and read without worrying about any confusing continuity. But, you can still expect a few familiar faces, like Batman, to pop up from time to time.

If you’re still not sold on the run, let me explain how Moore retconned Swamp Thing’s origin in his second issue, “Anatomy Lesson”. Originally, Swamp Thing was a scientist named Alec Holland who was transformed into Swamp Thing during a chemical lab explosion, pretty standard stuff. Alan Moore decided that Swamp Thing wasn’t Alec Holland. Nope, that guy died after the chemical explosion. Swamp Thing was actually a byproduct of the chemicals and vegetation. The vegetation became sentient and thought it was the recently deceased, Alec Holland. Oh yeah, and there’s also been a bunch of other Swamp Things throughout the years. Crazy, right!? I usually roll my eyes at retcons, but this one is something special.

Swamp Thing is full of some big ideas and beautiful, trippy art from Stephen R. Bissette and John Totleben. But, if you need something else to enhance your experience… I’ve got another graphic playlist for you to listen to! I wanted to highlight the inherently southern feeling of this series but add in the extra OOMPH of heaviness. There’s some classic rock, some Doom/Sludge, some ELVIS, it’s all over the place but I think it all works for Swamp Thing. Give it a listen!

What music would you put on YOUR Swamp Thing playlist?

What other comic book series would you like to see a graphic playlist for?